Welcome back to yet another developer blog for Holdfast: Nations At War! You will find that even within the release of Early Access this year, there will be a variety of playable classes on both land and sea. We will be gradually revealing our plans for them starting with the leader of the rank and file - The Infantry Officer. 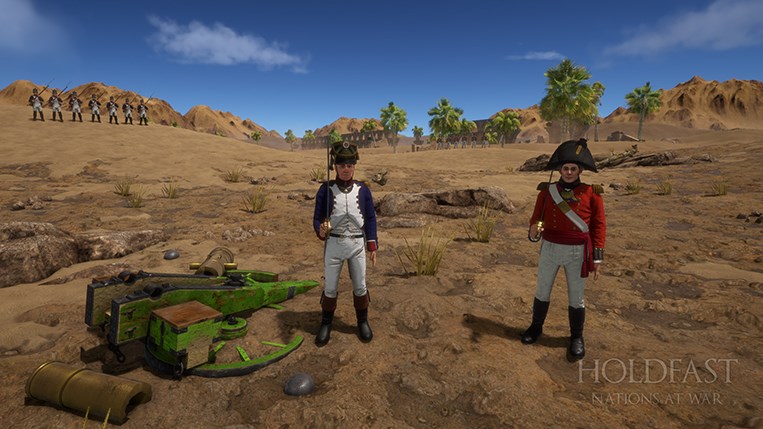 We thought it best to first provide you with an overview of the class system before we go into specifics for the Infantry Officer class.

Join The Army - Fight with a variety of classes such as the Infantry Officer, Line Infantryman and Rifleman from the army military branch on dry ground. Cannons will also play a major role in open field battles.

Join The Navy - You will find the Captain, Sailor as well as other classes playable aboard military sailing ships. The navy not only serves as a proponent to control territorial waters and make quick work of the enemy’s ships but also plays a decisive role in the assault of coastal emplacements.

Serving as a brief overview of the role that a specific class plays within the battlefield, we have categorised our classes to better distinguish those which play a commanding, offensive or supportive role.

Command - Lead your men to victory! Keep the line steady in open field battles or command your crew aboard ships from the age of sail. Issuing orders, rallying up your regiment before a charge, calling men to reinforce your position in the field of battle and sailing ships of war, are some of the duties that come with playing this role.

Offense - Join the rank and file. Your duty is to bring a swift end to your enemy. Black powder firearms are your primary tools of choice but if things get up close and personal, the bayonet amongst a variety of other melee weapons can do their task.

Support - Increase the chance of your team’s success in battle. Cripple the enemy's defences by supporting the fight from the rear with artillery, heal your wounded teammates and more.

Play as one of the commanding roles such as the Captain or Infantry Officer in Holdfast: Nations At War to direct the field of battle! You’ll be able to issue orders to the rank and file or your fellow crewman. When you issue an order, a message will be displayed alerting players in your faction of your command.

Some of you might have already noticed from what we hinted within our trailer but the orders themselves are also voice acted. For the sake of authenticity and increased immersion, we did our voice acting in both English and French.

Traits are bonuses given to certain classes that play a role in differentiating playing styles. Some of these traits not only affect the class you’re playing but also others close to your vicinity. Traits which affect others were specifically tailored to give our support classes a purpose on the battlefield.

Abilities define what a class is able to do and provides you with a deeper understanding of the role the class plays within the battlefield. For instance, this could be the ability to issue orders, fire cannons or heal other players.

We'll make sure to provide functionality for server administrators to enable or disable traits and orders. This will allow you to customise your own experience and friendly or competitive events to your liking.

Holdfast: Nations At War is being coded from the ground up on the Unity Engine by a single programmer. Anvil Game Studios is an indie company with a relatively small team and while that has it’s own benefits, we do have to limit our scope with regards to certain features and put our priorities on the ones we know the community wants most.

Some of these features may not be present directly on the first day of Early Access. They will, however, be included during the course of the Early Access period. We want to share our thoughts, ideas and plans for the game with you and while we're at it, be able to gather feedback and iterate at an early stage.

Lead your men to victory with the Infantry Officer class in Holdfast: Nations At War! Lead charges and command the rank and file into advantageous positions on the battlefield. 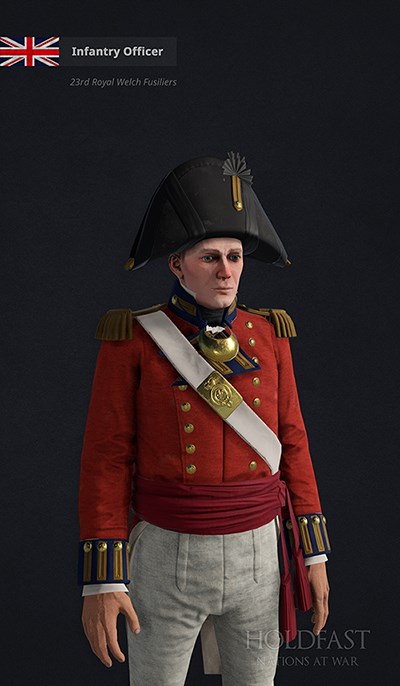 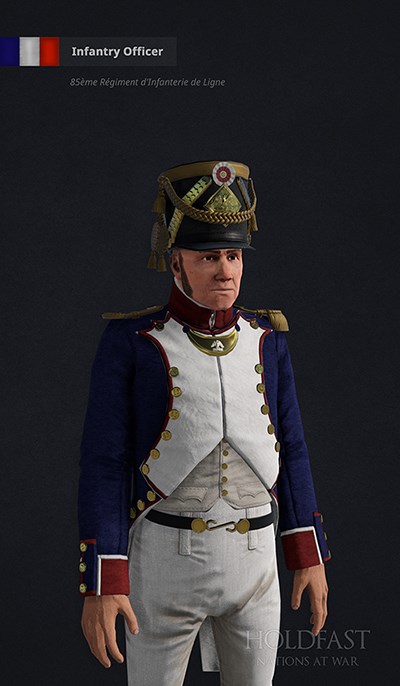 Army Authority - An officer in command. You are able to issue orders.

Reinforce - Call for support from your fellow men! A message will be relayed to all players in your team to reinforce the position where you are located. An objective will also be shown on the minimap along with an icon in 3D world space marking the Infantry Officer’s location for a short time.

Charge! - Lead your men in a glorious charge! This will increase the damage dealt by nearby teammates when using melee weapons for a short period of time. Players will also receive a message instructing them to charge.

Both the charge and reinforce orders will have a long cooldown so one must make careful use of them.

Resilient - A strong sense of duty. This trait slightly increases the HP of the Infantry Officer to give him a better chance for survival in the field of battle.

Distinguishable - Stand out from the rank and file. You appear in a different colour on the mini-map. This will make it easier for players within your distance to spot your location and follow you into battle.

Sword Specialisation - Excels with using swords. Your damage when wielding a sword is slightly improved.

Officer’s Sword - An officer’s melee weapon of choice. You wouldn’t be able to lead a proper charge without one.

Pistol - Single-shot muzzle loaded firearm limited by its short range. Pistols can be reloaded more quickly when compared to other firearms.

Spyglass - Spot the enemy from a greater distance.

Lantern - Light your way through the map during night time. Watch out, though, you can easily make your location known to the enemy!

We very well understand that balancing is an ongoing process within games. The class system and any other mechanic for that matter will be subject to improvements and changes upon feedback.

Do you have any ideas or suggestions for the Infantry Officer class? We would love to hear them. Go ahead and join in the discussion on our forums here for this blog.